For hundreds of years Sheriff’s and other Law Enforcement officers throughout East Texas have met together and exchanged information. In the late 1800’s, they would gather under the tall pines, tie their horses off to a tree, build a fire and discuss the outlaws that plagued their communities. As the information highway expanded so did Law Enforcement and the way that they exchanged information. Now there are cell phones, emails and if your agency lucky enough to afford it there is even real-time GPS tracking, which are great but you have to have the right people working them. The question stands how did we get there?

In 1951 Sheriff Frank Brunt of Cherokee County hosted a group of East Texas Sheriff’s, Chief’s of Police, State and Federal agents at the Second Judicial Court in Rusk, Texas. From a photo taken at that meeting, FBI Agent E.A. Stanfield, Chief M.C. Roebuck of Nacogdoches, Sheriff Lloyd Lovell of Houston County, Sheriff Roy Harrington of Anderson County, Deputy W.C. Woods of Angelina County, Trooper Glenn Elliot, Deputy Roscoe Holiday and Deputy G.W. “Shorty” Woods of San Augustine County along with many others who were unable to be identified. From that humble meeting and E.T.P.O.A. was formed.

The purpose then and now has not changed but the organization has most definitely grown as do most good things. From a meeting of less than thirty Law Enforcement officers to exchange information about crime and criminal activity to the Training Conferences that are now enjoyed by hundreds of officers throughout the East Texas Region, this is E.T.P.O.A.

What began as a simple meeting of a few East Texas Lawmen has evolved into a yearly training conference held in different parts of the East Texas Region. The current boundaries of the ETPOA includes from the Louisiana State Line, Westward along Interstate 35, between the Red River to the Gulf of Mexico. The ETPOA can boast one of the oldest regional associations in the East Texas area.

The Board of Directors is elected from the membership and is made of Peace Officers from local, State and Federal Agencies throughout the East Texas region. The Board is guided by the Past Presidents Board which consists of those members who have served this organization in the past. As of 2005 this organization boosts membership in the range of 350 members.

Beginning in January of each year the association has a fund-raiser, usually a Rifle Raffle, which is awarded at the Annual Fish-Fry held in April. This function allows officers and their guests to meet and enjoy a meal and gives them a chance to see old friends and make new ones at the same time.

In June of each year there is a three day Training Conference held which provides officers with training for TCOLE hours which have become invaluable in this line of work. The conferences usually begins with training and the President’s Reception on Sunday, training and fellowship Monday and Tuesday and culminates with an Awards Banquet that recognizes local Law Enforcement Officers who have distinguished themselves and their departments in the past year. ETPOA has also been fortunate to be able to award several area youth with scholarships to assist in hopefully beginning a Law Enforcement Career.

Where would Law Enforcement Officers be without our back-up. Family is a big part of our jobs and the Training Conference is a family affair. There are events for the spouses and they are never forgotten.

Have we peeked your interest yet, if so, download an application and join us, become a member of ETPOA. 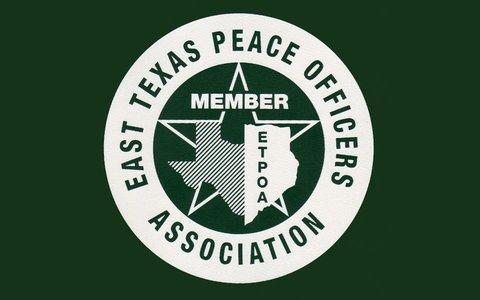